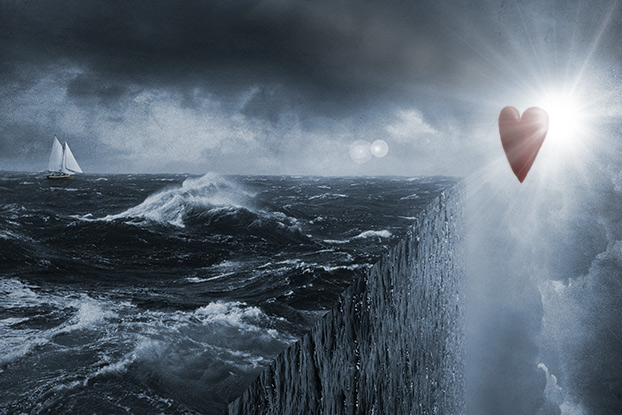 We hear it from friends, family, movies, tv, commercials, bloggers.

It can ring true sometimes. It can make us pause and check: “am I?”

Sure. There’s something to it.

After all, you can probably sense that there’s some deeper part of yourself that, in some way, knows more than your usual wash-the-dishes, match-your-socks, distracted, I’m-so-behind-on-my-emails, everyday self.

And it makes sense to think that if you could just tune out the “distracted-everyday-matching-socks-self” and tune in more to that “deeper-true-heart-self,” then…well, life would go better.

After all, we need some way to navigate a world that pretty consistently seems confusing, bizarre, or perhaps wildly, roaringly, whole-hog insane.

We all want some North Star, some existential compass that always points true north. Some trusty inner guidepost that will reliably, consistently, “show us the way.” And – conveniently enough – your “heart” is something you carry around all the time. You don’t have to consult a book, or ask Oprah, or frantically scramble to look up the latest Harvard study. It’s always there. It’s a steady, reliable, faithful companion. (And portable, which is nice.)

It’s no mystery why “follow your heart” is such a popular mini-ethos these days.

It can make for some good stories.
“Remember that time I spent every dollar I had to buy a horse and Fabio wig so I could ask Sarah to prom? And the horse ate my Fabio wig, then dragged me across the neighborhood, until I ended up, bloody and unconscious, with no pants, in front of Sarah’s house? Good times!”

It works. Sometimes.
“Should I marry for love, or money?” Case study, Titanic: Jack, the street-smart, caring but poor scrapper, or Cal, the spoiled, abusive trust fund kid? Or Wuthering Heights, Heathcliff vs Edgar? Yes. Sometimes “follow your heart” works.

It’s flattering.
“I follow my heart. And my heart is infallible. Ergo, I am infallible.” Instant, easy awesomeness.

It lets you off the hook.
“Hey, that wasn’t my fault. It was my heart’s fault. I was just following it.”

It gives you a nearly-bulletproof way to fend off criticism.
“OK, so maybe I did cheat on my husband with his brother and nephew. But hey, I was following my heart! Why are you so against love?”

It’s a way to rebel against modern life
Much of modern life can seem impersonal, dehumanizing, demoralizing, hollow, flat, soulless, phony. “Following your heart” can be an act of rebellion against that.

Fair enough. As far as slogans go, it has some things going for it.

But that doesn’t mean it works.

But there seems to be a law in the universe that every profound nugget of wisdom – no matter how true, useful or valid – will eventually get misinterpreted, misused, and watered-down to the maximum possible degree. No insight is idiot-proof. (I’ve proven this myself on several seemingly idiot-proof insights.)

But some advice just begs for it.

But, no. Your “heart” can tell you two different things. Contradictory things. And not just two. Several. Many. All at once. And it can speak in code. And it can shapeshift, and change in an instant.

(Granted, these examples are a bit cherry-picked.)

But if we dig into the real substructure underneath “heart-following”, we often get some variation of “do what feels right.”

And it’s a short slide from there to “do what feels good.”

And it’s an even shorter slide from there to “if it feels good, do it.”

Saying things in an emotional state that we regret later.
We’ve probably all blurted something in a state of anger, frustration, hurt, fear, etc. Then the moment passes, the emotion vanishes, and we’re left with the aftermath. Feelings, relationships, careers, families, people, damaged or destroyed.

“Crimes of passion.”
OK, when something has its very own entire category of crime, there’s usually reason to proceed with caution. “Follow your heart” can lead to “crimes of the heart,” which can lead to, well, crimes.

Life-destroyers
Affairs. Scandals. Wars fought, empires fallen, entire civilizations destroyed over a mild crush, a pretty face, a glance. Not to be too dramatic or anything. Sure, not everyone’s on the verge of triggering a Trojan War from their cubicle. But hey, some might be.

Manipulative marketers
Entire disciplines, schools of thought, and university/corporate departments these days are dedicated entirely to figuring out how to get your “heart” to tell you what they want it to tell you. Marketing these days is nearly weaponized. Are they clearly, logically explaining the features and benefits of their product or service? Nope. They aim square for that blood-pumper in your chest. So they can get it to say exactly what they want. And then, of course, they want you to listen to it.

Modern science warns us against it

Some of those same folks (who are studying ways to manipulate your heart so they can sell you stuff) are also mapping out the ultimate in uncharted territory: the tangled, labyrinthine, arational twists and turns of our inner selves.

Modern psychology and behavioral economics are rigorously discovering (re-discovering) that human beings are consistently, predictably, systematically irrational.1 We have a lot of sloppy thinking baked in to our bones.

Call them heuristics or biases, undeveloped emotional intelligence, the “adaptive unconscious” that governs maybe 90-something percent of our lives…it all builds a strong case for caution.

Science is rediscovering and validating something a few smart folks figured out centuries ago: by default, we truly, in a very real way, don’t know ourselves.

And speaking of centuries ago…

Ancient wisdom warns us against it

Buddhism speaks about “kleshas” (“mental states that cloud the mind and manifest in unwholesome actions”).2 The “three poisons” of Moha (delusion), Raga (greed, sensual attachment), and Dvesha (aversion, ill will, or in modern parlance, “Drinking Hateorade.”)

It’s not explicit. “Don’t follow your heart” isn’t a Fifth Noble Truth. But reading between the lines, the point is clear: if you look closely, it ain’t all sunshine & rainbows down there.

A man said to Allah, “Grant me all the desires of my heart.”

Immediately, his neighbor’s house collapsed. (The neighbor was rich, and the man had always envied him.) He rushed outside, and collided with a small child. Annoyed, he looked down at the child, who then disappeared off the face of the earth.

The man then understood, and begged, “No more, please, no more!”6

(We won’t hold our breath for the Disney version of this story. But it makes the point: “heart” stuff isn’t all herding warm fuzzies.)

The Judeo-Christian perspective says quite a lot about the “heart.”

Some of it is promising (“let not your heart be troubled”7), even uplifting (“he will give you the desires of your heart.”8)

But then there’s this: “The heart is deceitful above all things and beyond cure.”9 And: “…out of the heart come evil thoughts, murder, adultery…”10 and so on.

Eventually, it’s just brutal: “He that trusteth in his own heart is a fool.”11

(No sugar-coating on that one.)

It says to guard your heart, examine it, keep it, purify it, don’t harden it, do various things with all of it.

Other smart folks have tried to warn us against it, too

Just a few other smart folks who have arrived at similar conclusions:

• Dostoyevsky described the heart as a “battlefield.” 12
• Euripides (~400 B.C.): “…passion overpowers what counsel bids me.” 13
• Virginia Woolf spoke about the beauty of the world having two edges, “…one of laughter, one of anguish, cutting the heart asunder.” 14
• William Golding in The Lord of the Flies: Ralph weeping for “the darkness of man’s heart, and the fall through the air of the true, wise friend called Piggy.”
• Speaking of dark hearts, Joseph Conrad wrote Heart of Darkness (which Coppola loosely based Apocalypse Now on. Which syncs up pretty well with Dostoyevsky, above.)

And of course, we can’t argue with Piggy.

OK, we’ve made some progress. And stirred up more questions.

After all, if we don’t follow our heart, what should we follow? If we graduate from heart-following into something more advanced, what would that look like? Is there a better slogan? Would it be even half as catchy?

We can’t explore all these trails here. But we can sketch out some outlines of what it might look like.

It would likely involve “knowing thyself.” (Imagine yourself as a gold miner of the soul, sorting and sifting your real “heart” from chunks of dirt, rocks, coal, instincts, personal desires, ego, etc.)

It would definitely incorporate some external reality checks. (Factoring modern science, humanity’s collective wisdom, and other smart folks into your calculations probably isn’t the worst idea in the universe.)

It would also make sure that “follow the heart” meant more than “turn off your head.” (If only things were that simple.) Sure, our heads aren’t perfect. But they also aren’t always perfectly wrong. However lives go wrong, it usually isn’t due to taking a moment to stop and think.

Ideally, you get the best of both: the best aspects of the “heart” and the “head” (without the worst), working together, in synchronized harmony, as a team. An inner dynamic duo.

Movies, commercials, rowdy friends and so on will probably keep milking that slogan for as long as they can. It’s just too easy, catchy, uncontroversial, focus-group-tested.

But imagine, when you hear it, taking a harder road.

Imagine interpreting it in a way that a lot of folks probably won’t.

For example, what if, when you hear “heart,” you don’t take it as rejecting your head, but including it? So it doesn’t mean not thinking, but thinking with all your heart? And vice versa – feeling, but also with your head? What if it doesn’t mean limiting awareness, but being as aware as possible? What if you don’t interpret it as focusing on just one part of yourself to the exclusion of others, but as tuning in to as many aspects of yourself as you can – including the deepest?

Not an easy road to walk. True.

But of course, ease isn’t our goal here. We want a road worth walking. And if we wind up more centered, settled, rooted deep in solid ground as we navigate this crazy world…well, it could easily be worth whatever it takes to get there.

Wait a minute…what was that?

Did you just feel that?

I think that was your heart telling you to walk it.

The Meaning of Life: 10 Popular (But Secretly Flawed) Answers

10 Things Everyone Should Know About Modern Spirituality