A spiritual approach for doubters, the practical, the tough-minded, the "Solos"

"Here the ways of men part:
if you wish for peace of soul and happiness, then believe;
if you wish to be a disciple of truth, then inquire."
- Fredrich Nietzsche 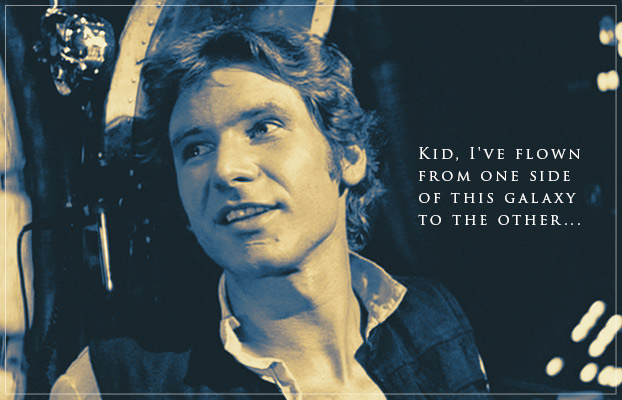 "...I've seen a lot of strange stuff, but I've never seen anything to make me believe there's one 'all-powerful Force' controlling everything..."

When it comes to "spiritual" stuff...

Are you a skeptic?

Do you see religions as asking you to believe blindly?

Do you see science as asking you to doubt, rely on evidence and logic, and test and experiment - which seems like a much better method?

When someone says anything along the lines of religion, spirituality, what "God" "wants" them to do...do you immediately respond with at least a little tinge of doubt?

When you hear about chakras, crystals, "energy," auras, and how "evolved" folks are, do you find your baloney-detectors going off like crazy?

Do you see yourself as "scientific" or "tough-minded"...and so believe that this pretty much disqualifies you from anything along the lines of "spiritual"?

- because you think "spiritual" stuff is...well, for mushy-minded folks who believe what they're told?

...and there's nothing "spirituality" has to offer for skeptical, scientific, tough-minded folks?

Much of the “spiritual scene” today seems to be roughly divided into two camps: “believers” and “skeptics.”

According to those on the “believer” side, “believing” roughly means having “faith.” It’s better to “have faith” than it is to not. (“Oh, ye of little faith” didn’t come across as a compliment.) According to this side, the truth about The Big Picture is revealed through scripture or holy texts, and you should "have faith" in that revelation.

According to those on the “skeptic” side, much of the above is hogwash. The best way of knowing the truth is through hard, rigorous, empirical science. Disciplined, rigorous thinking, hard study and testing of the world around us are bedrock of solid ground; suspicion of everything else - especially fantastic, unproven claims with no evidence to support them - such as those in holy texts - are slippery, sinking sand.

These two approaches typically view each other with suspicion, even as enemies.

We, your humble and loveable LiveReal Agents, see this as a problem.

Why? Because we think a lot of unnecessary suffering, division and friction that comes as a result of forcing people to choose between these two particular camps. And being forced to choose between these two particular camps is unnecessary. Framing the issue in this way, which seems to happen pretty often, seems to us misguided. And in our most utterly humble opinions, there’s blame to be shared on all sides.

There's merit on both sides of the issue.

Serious skepticism is a mandatory requirement for modern life today, merely to survive to some areas.

To take just one area: we’re bombarded by a relentless barrage of advertisements and messaging that bark at us nonstop in ways that thousands of years of evolution never prepared us for. (This what the “Battle For the Mind” is designed to prepare us for).

Without a healthy “mental immune system” of skepticism against even this - not to put too fine a point on it, but - we’d likely soon find ourselves broke, naked and alone, huddling in the streets, utterly fleeced. Or, to paint a slightly less dramatic picture...we’d likely soon find ourselves unwitting pawns of whoever would be most able to take advantage of our gullibility. So, yes – at least in some areas, skepticism is mandatory in the world today, assuming you don’t want to wind up a sucker, patsy, pawn.

That said…skepticism alone doesn’t much to build a life on. ”Skepticism” is great at poking holes in things and tearing them down. By definition, to be a skeptic you have to be skeptical of something, which means you need something to rail against) – but it’s not so great at building things up. Skepticism alone is not a “creative” force; it’s a secondary, even reactionary force. You can't just "be skeptical" without first having something to be skeptical of.

To build a life, you need something “positive” to build from. The idea of waking up every morning, jumping out of bed, and running out into the world “to go be skeptical of stuff!” isn’t exactly inspiring. Nobody makes it their mission in life to "be skeptical of stuff." (Or should).

So here's where we arrive: there is a need for skepticism, and a definite need for…something positive that provides something for skepticism to rail against. And ideally, "something" that can potentially provide the kinds of “benefits” (if you can call it that) – that real spirituality has to offer: meaning, purpose, morality, ethics, some kind of framework for reality and The Big Picture and The Big Questions and all the rest.

We need an approach that incorporates the best of both, and discards the worst of both.

The ideal approach, in our view, would actually encourage skepticism and tough-minded, rigorous thinking while also encouraging any and all positive benefits that real spirituality has to offer. This approach would encompass the positive aspects of both skepticism and spirituality and preserve the benefits of both. It would be tough-minded against nonsense, yet life-enhancing and meaningful in getting the individuals through the hard knocks life gives us while also giving us a valid framework for not just life, but Big-Picture "Reality."

It would provide a way for skeptics – defined those not willing to pay the price of admission in the form of granting assumptions that they aren’t ready to grant – to avoid a barren, empty soulessness where they hide in their tower and throw rocks at everything. And a way for "believers" to preserve what's valuable in their spirituality without slipping into sloppy, magical, wish-fulfilling delusion.

We need a “spirituality for skeptics.”

...and we think we’ve figured it out.

(Umm…strictly speaking…”we” didn’t really figure it out. We found other people who figured it out. We’ve been scampering across fields, waving our our mental butterfly nets, collecting ideas, collecting them, sorting them out, and presenting them here.)

So let’s try that again:

We think we’ve found some folks who have figured it out.

What we found is an approach that should satisfy the most hard-nosed, bitter, eye-rolling, forehead-slapping scientists (key word being “scientist”) – even up to the most hard-nosed skeptics of philosophy, up to the point of being literally as skeptical as you can get (eg being skeptical about whether the object in from of you is real, etc).

Yet on the other side, this approach is also validated by such towering and respected spiritual luminaries as Thomas Aquinas, Tertullian, Thomas Merton, and C. S. Lewis...and on the Buddhist side of things, such Buddhist luminaries as, well, Gautama the Buddha himself. (Buddhism doesn't get any more "luminary" than that.)

So, what do you think - does this approach succeed? Does it satisfy both sides?