“Barry” and the Inner Growth of a Hollywood Hitman

How acting can become a way to know yourself 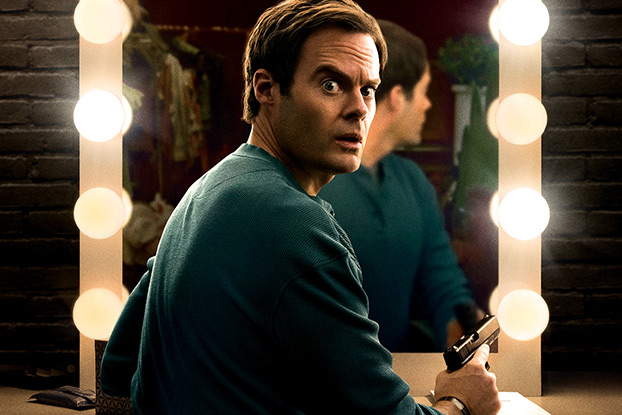 Barry, a hitman from the Midwest, moves to Los Angeles and suddenly finds himself enrolled in an acting class.

That’s the premise of the first season of the HBO show.

So, how can a show about a low-rent hitman who is studying acting teach us about knowing ourselves?

It might be surprising. Even for those of us who aren’t actors or hitmen.

“Barry” himself is played by Bill Hader of Saturday Night Live and South Park fame. Hader also wrote and directed some episodes of the show, executive produced, and “created” the show itself. The show itself has been Emmy magnet. It seems clear that Hader dug deep and, it seems, really had something to say. Something that resonated with a lot of other folks. And the heart of it, really, seems to be about acting.

Which might seem a little strange to be something we’re talking about here.

After all, seriously: is there anything that a group of acting students can teach the rest of us about living better, happier, smarter, more awesome lives?

Is there anything we can learn about transforming ourselves from an ultraviolent dark comedy about a guy who apparently knows nothing about acting, but is really good at taking out bad guys?

Strangely enough, yes. We think so. It has to do with acting being a form of “inner work.”

The show begins with Barry lonely, restless, and basically depressed.

He also doesn’t have much of a clue, as we’ll soon discover – like most of us – about what “real acting” actually is.

But he starts to learn. He accidentally joins an acting class (for a girl), and eventually finds himself being mentored by an acting coach, Gene Cousineau (Henry Winkler, aka “Fonzie.”) Gene might be the only person in Barry’s life who actually knows something.

Here’s one of the gems Gene drops on Barry:

“We all act in our everyday lives. But what I want you to do is simply identify, moment to moment, what you’ve been doing subconsciously your whole life.”

In another scene, Barry is upset, having just witnessed something highly emotional, and is at a loss in knowing to how to handle it.

Sally (Sarah Goldberg) is the most experienced student in Barry’s acting class. She tries to comfort him, while explaining the process of real acting to him.

(Sally) “Those feelings that you’re having right now: those are the paints in your acting toolbox. That’s what this class is about! You know…getting to that. Taking that apart, and dealing with it. It’s called being human. That’s what acting is.”

So, what’s going on here, and why are we bringing this up?

What we find really interesting here is how the show portrays Barry’s process of learning his craft.  There's a way that, for Barry, acting eventually becomes a form of “inner work” (aka “working on yourself.”) And he transforms - at least partially - as a result.

For Barry, it’s a messy, complicated, and difficult process.

As it usually is for most of us.

But let’s look a little more closely at how Barry starts to learn about himself.

As Gene (Fonzie) described it: acting is identifying, “moment to moment, what you’ve been doing subconsciously your whole life.”

Another way of saying the same thing: it’s a process of “making the unconscious, conscious.”

Which sounds a bit like old-school psychotherapy, doesn’t it?

Which is exactly how the acting students – and teacher – seem to approach the craft. Acting – real acting – seems to be a far cry from merely pretending-for-fun or playacting or make-believe. Sanford Meisner described acting as “living truthfully under imaginary circumstances.” Which is to say, in real acting, the emotions are real. Only the circumstances around them are imaginary.

And when it’s real, it can become a form of therapy for the soul. (Sally, at one point, basically says as much.) Which can all lead to, among other things, emotional catharsis (Greek for “cleansing”).

So actors don’t paint on a canvas – they “paint” with their feelings.

And to do that, you have to be in touch with your feelings. And as Sally said, you have to figure out ways of “getting to that.”

And once you “get to that,” you “take it apart, and deal with it.” And by “it,” here, we’re referring to deeper parts of ourselves. Feelings and sensations that thoughts that we don’t often access during the superficial, day-to-day grind of modern life. Parts of ourselves that are often unconscious.

In other words, if Barry’s journey is anything close to a trustworthy guide, acting can be one approach to knowing ourselves better. It can be one method for making the unconscious, conscious. It can be one form of inner work.

Of course, it’s one approach of many. But the transformation Barry undergoes – however incomplete it might be – illustrates it well. He transforms from a depressed, lonely, listless shadow of himself to – well, something still troubled, but more assertive, more alive, more himself.

And acting was, for him, the road he took to get there.

Needless to say, this approach has its limits.

Almost needless to say: learning to be a competent actor is a distant shore from a path to complete and total enlightenment. (This is something more than a few successful actors have demonstrated clearly.) Many acting coaches, we can surmise, lack a comprehensive model of human nature to work from. Some might even be a kind of Sorcerer’s Apprentice in that, sometimes, they’re messing with forces they don’t entirely understand.

That said, their job description isn’t that of a Zen Master. It’s to teach acting. Their role isn’t to guide someone to full enlightenment. It’s to produce a competent actor. So, none of this is meant to come down on acting teachers like Gene. Good mentors, who provide the honest, tough-yet-compassionate, deeply personal feedback so many folks need, can be incredibly rare these days.

Barry's close-knit classmates seem to sense that they’re hitting on something more in all this. They’re touching on something special. It's not always there. But when it is, it's fascinating, and valuable, and cathartic.

Whatever that “something more” is, it still has the possibility to become something that – as it did for Barry – overcomes the meaninglessness, angst and soft nihilism of modern life.

And maybe those actors really are working to discover “something more.”

After all, certain moments in drama are magic. They’re a key part of why we spend billions of dollars every year just to witness. Those moments we find so compelling in good drama (and sports) – often happen when a human being gets, to some degree, exposed.

There are certain moments when something about a person gets revealed. We get a chance to peek behind a mask or persona. And even for a few seconds, we get a glimpse of something. Maybe it’s something vulnerable, or tragic, or heroic inside a person that we hadn’t sensed before. It’s something hidden beneath the surface, and whatever it is, it’s something we find endlessly fascinating.

Acting, apparently, can sometimes be an group of individuals working to try to tap “that fascinating thing” – whatever it is – within themselves. And they do it by deliberately working to step inside someone else’s skin. And when it’s real, it can actually become a deliberate practice of intense empathy – a practice that takes the objective and works to make it subjective, and takes the subjective and makes it objective. It’s dropping yourself to become another person, and adopting another person as, at least in part, yourself.

So, that’s one way acting can become a form of inner work.

As Sally expressed it: “It’s called being human. That’s what acting is.”

Sleepwalking through life, consuming one thing after another, lurching from one pleasure to the next, hopping from one distraction to another to another, nonstop, is easy.

Being human is hard.

Let’s do the hard thing.

“Arresting performance by an actor
is not a matter of style or rehearsal,
but of self-knowledge
and an inescapable desire for complete personal exposure.
That compulsion for “public emotional nakedness”
drives the actor to ask not, ‘who must I become to create the character?’
but to ask, ‘who does the character become because I play it?’”
- Sir Laurence Olivier

Two moments from this show really stood out for us, and we just wanted to mention and appreciate them.

(Spoiler alerts, for real. If you haven’t seen the show, and are planning on it, it’ll be way better if you see them first before reading this.)

Barry, as a wholly incompetent actor in his first few classes, performs (tries to perform) a scene from David Mamet's classic “Glenn Garry Glenn Ross.” And of course, Barry tries to play the iconic Alec Baldwin role. In that scene, Baldwin just verbally and emotionally brutalizes everyone in the room, pulverizing each of them into submission in a naked and brazen act of emasculating dominance.

But it comes across a little different.

As Barry performs that scene – speaking the exact same words Baldwin used – he comes across as a polite, deferential, helpful, really nice guy.

It doesn't take long until until Gene, utterly horrified and barely able to believe what he’s seeing, mercifully puts a stop to it.

This moment comes when Barry, due to his earlier inept performances, lands only a tiny role in the class’s production of Macbeth.

He gets only one short line. Six words. Walk onstage, say the words, walk off. Job done.

But the way he performs those six words brings the entire production to a standstill. He summons the entire story of his life up to that point. And he rolls it all into a ball, and forces it to crisis.

The gravity of the moment, brought about by the way he says those six words, mesmerizes everyone in the room.

On the surface, what he did was straightforward. Barry simply walks onstage, says those six words, and then walks back offstage.

But the way he does is transforms the entire room and production. Suddenly, the production is no longer just a bunch of people in costumes pretending stuff. It's a moment of magic.

Dale Carnegie once said something like this: in every communication, only 10% is what you say, 90% is how you say it. The two scenes above show, in a visceral way, how true that is.

The good stuff, it seems, really is below the surface.

“It is only with the heart that one can see rightly;
what is essential is invisible to the eye.’”
- Antoine de Saint-Exupery, The Little Prince

For our online course, "An Introduction to Inner Work," click here.

7 Practical Spiritual Experiments You Can Run To "See For Yourself"

What Is Real "Happiness"?