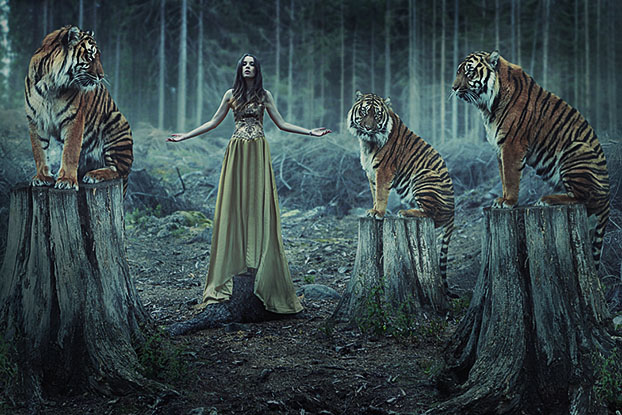 How can we overcome fear?

Jiddu Krishnamurti seems to have some pretty good things to say on the matter. In two different books, The First and Last Freedom and Commentaries On Living, First Series, he addresses the difficult topic of fear directly.

(That includes, for example, the idea that "overcoming" fear probably isn't exactly the best way to think about it.)

Krishnamurti here observes that we don't experience "fear" by itself.  If I tell someone, "I'm afraid," the natural question is typically, "Afraid of what?" There's not just fear by itself, in isolation. There's always the "what," whether we know it or not.

The question is, how to be rid of fear? First of all, anything that is overcome has to be conquered again and again. No problem can be finally overcome, conquered; it can be understood but not conquered. They are two completely different processes and the conquering process leads to further confusion, further fear. To resist, to dominate, to do battle with a problem or to build a defense against it is only to create further conflict, whereas if we can understand fear, go into it fully step by step, explore the whole content of it, then fear will never return in any form.

There's the idea of gearing up for battle and charging into the "army" of fear and ultimately demolishing it. This might work sometimes, here and there. But in the long run, in requires charging, over and over again. Fear keeps resurfacing. A better strategy: to understand it. Then it "will never return in any form."

As I said, fear is not an abstraction; it exists only in relationship. What do we mean by fear? Ultimately we are afraid, are we not, of not being, of not becoming. Now, when there is fear of not being, of not advancing, or fear of the unknown, of death, can that fear be overcome by determination, by a conclusion, by any choice? Obviously not. Mere suppression, sublimation, or substitution, creates further resistance, does it not? Therefore fear can never by overcome through any form of discipline, through any form of resistance. That fact must be clearly seen, felt and experienced: fear cannot be overcome through any form of defense or resistance nor can there be freedom from fear through the search for an answer or through mere intellectual or verbal explanation.

Here he describes the root of fear, or what he says we're (ultimately) afraid of: "not being." Some might think of this as "death." Really, it's more complicated than that. Again, the "charge the hill!" frontal assault on fear won't work. It "creates further resistance." This includes a "mere intellectual or verbal explanation. This isn't a math problem, where one person can just give "the answer" to another. It's not merely a piece of information. It's an experience.

There are facts. Then there's how we interpret those facts.

We often confuse the two. We're often so immersed in our interpretations of things that we miss out on what's actually going on.

"Just the facts, ma'am." That means "complete communion with the fact." Then, he says, "there is no fear."

For example, one is afraid of loneliness, afraid of the ache, the pain of loneliness. Surely that fear exists because one has never really looked at loneliness, one has never been in complete communion with it. The moment one is completely open to the fact of loneliness one can understand what it is, but one has an idea, an opinion about it, based on previous knowledge; it is this idea, opinion, this previous knowledge about the fact, that creates fear. Fear is obviously the outcome of naming, of terming, of projecting a symbol to represent the fact; that is fear is not independent of the word, of the term.

He uses an example of loneliness. Often, the bare fact of simply being alone isn't a problem. It's all of our hangups about it. Same with fear.

I have a reaction, say, to loneliness; that is I say I am afraid of being nothing. Am I afraid of the fact itself or is that fear awakened because I have previous knowledge of the fact, knowledge being the word, the symbol, the image? How can there be fear of a fact? When I am face to face with a fact, in direct communion with it, I can look at it, observe it; therefore there is no fear of the fact. What causes fear is my apprehension about the fact, what the fact might be or do.

Thus it is the mind that creates fear, the mind being the process of thinking. Thinking is verbalization. You cannot think without words, without symbols, images; these images, which are the prejudices, the previous knowledge, the apprehensions of the mind, are projected upon the fact, and out of that there arises fear. There is freedom from fear only when the mind is capable of looking at the fact without translating it, without giving it a name, a label. This is quite difficult, because the feelings, the reactions, the anxieties that we have, are promptly identified by the mind and given a word. The feeling of jealousy is identified by that word. Is it possible not to identify a feeling, to look at that feeling without naming it? It is the naming of the feeling that gives it continuity, that gives it strength. The moment you give a name to that which you call fear, you strengthen it; but if you can look at that feeling without terming it, you will see that it withers away. Therefore if one would be completely free of fear it is essential to understand this whole process of terming, of projecting symbols, images, giving names to facts. There can be freedom from fear only when there is self-knowledge. Self-knowledge is the beginning of wisdom, which is the ending of fear.

"There can be freedom from fear only when there is self knowledge."

To "know yourself" means, in part, getting to know "the mind that creates fear." It means sorting out "the process of thinking" as opposed to "the fact."

To be able to "(look) at the fact without translating it, without giving it a name, a label," is no joke. As he says, it is "quite difficult."

But being able to "look at that feeling without terming it" (without labeling it, theorizing about it, etc) is key. Some meditation practices emphasize just being aware of the raw sensations in the body, and not the mental interpretations of them.

This isn't anti-intellectual. It's more of an effort to rise above the noise and dust in order to see clearly what's actually happening. Often, to use a classic example, what you thought was a snake is actually just a rope. But if you're freaking out and wrapped up in your unverified assumption that it's a snake, and you never question that assumption or bother to verify it, you'll never see that it's actually just a rope, and that there is actually nothing in reality to be afraid of.

excerpt from The First & Last Freedom

Another passage from Krishnamurti:

There are plenty of things we can potentially be afraid of. It's part of the human condition.

"Fear is uncertainty in search of security." We assume that uncertainty is a bad thing, and what we think security is a good thing.

Yet often, when we're totally secure, and we have no uncertainty, we get bored and restless. So, that assumption isn't always valid.

At the beginning of a football game, there's uncertainty. We don't know who is going to win or lose. But usually, that's part of the fun. If we knew in advance who was going to win and lose, that would spoil the fun. In the same way, total security often leads to complacency. If we assume that we're The World's Greatest Person Of All Time and we're very secure in that idea, a little insecurity could be a good thing. Maybe that "security" is keeping us from growing.

The effort to become is the beginning of fear, the fear of being or not being. The mind, the residue of experience, is always in fear of the unnamed, the challenge. The mind, which is name, word, memory, can function only within the field of the known; and the unknown, which is challenge from moment to moment, is resisted or translated by the mind in terms of the known. This resistance or translation of the challenge is fear; for the mind can have no communion with the unknown. The known cannot commune with the unknown; the known must cease for the unknown to be.

What Krishnamurti refers to as "the mind" in the passage above is what some others describe as "ego." It "can function only within the field of the known," and "the unknown...is resisted."

In other words, "I know what I know, and I don't want to know what I don't know." This becomes a circular loop of thinking. It's a way to resist whatever we don't know.

We're fascinated by drama in movies and television. In Story, Robert McKee says this: "The substance of story is the gap that splits open between what a human being expects to happen when he takes an action and what really does happen; the rift between expectation and result, probability and necessity. To build a scene, we constantly break open these breaches in reality." (179)

We love watching the "known" of others get challenged. But when it comes to ourselves, we're often terrified of it, and avoid it every change we get.

The mind is the maker of fear; and when it analyses fear, seeking its cause in order to be free from it, the mind only further isolates itself and thereby increases fear. When you use analysis to resist confusion, you are increasing the power of resistance; and resistance of confusion only increases the fear of it, which hinders freedom. In communion there is freedom, but not in fear."

There's no quick "tip" - even in today's blog-happy world - that will easily extinguish fear, once and for all.

But this doesn't mean that there's no solution at all. He does point us in a direction. His advice seems to lie in the direction of "knowing yourself," understanding your own ego, and trying to ground yourself in genuine reality.

But nobody said this would be easy. And there's reason for hope. As he says, "if we can understand fear, go into it fully step by step, explore the whole content of it, then fear will never return in any form."

This means an effort to see clear facts verses our interpretations of them, the reality of a situation verses what our minds or egos tell us about them, not getting so wrapped up in what we "know" (or assume) that we become afraid of seeing what we don't know. We might "know" that something is a snake, when in fact, we're actually afraid of a rope.

All that fear might be based on a misunderstanding of what's actually going on.

So, take heart. Courage might be closer than we think.

"Self-knowledge is the beginning of wisdom, which is the ending of fear."

How To Cope With Anxiety, in a Nutshell

An "Existential Crisis": What It Is and What To Do About It

What is "Angst"? A Brief Guide in Plain English

The Perennial Psychology: A Timeless Approach to Understanding Human Nature