Why “The Pursuit Of Happiness” Is Sometimes Doomed

The Connection Between Happiness and Human Nature 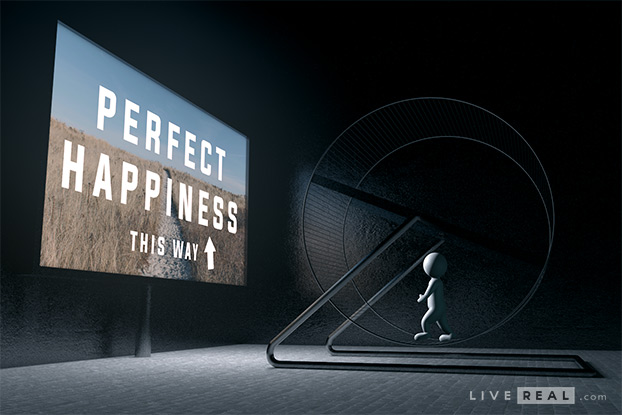 We’re all searching for happiness.

We can start there as a premise. We all want something we can call “happiness.” Whatever that actually is, we can’t not want it.

So the trillion-dollar question is, how do we find it?

After all, we hear a lot about the pursuit of happiness. But is it always around the corner? Is it forever just out of reach? Do we ever stop pursuing it, and actually experience it?

Well, if we’re serious about the matter, it seems that there’s one key in this puzzle that we have to take into account. Because without it, it seems pretty easy to wind up dazed and confused. 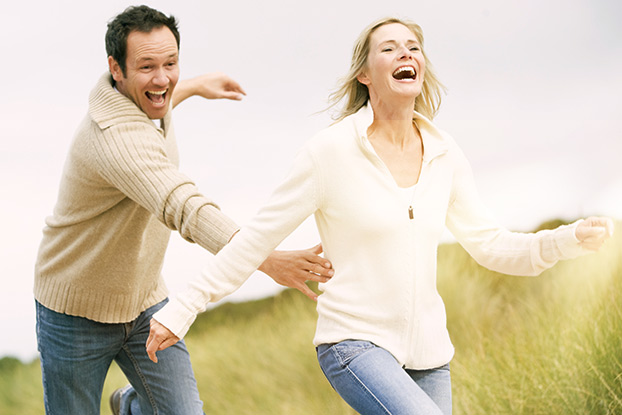 Right now, the bulk of mainstream science, to speak generally, offers us one model of human nature.

That model is, in so many words, evolutionary psychology.

This model can pretty much be summed up in two words. Essentially, “we’re animals.” Intelligent animals, yes, but animals nonetheless. Our genes have evolved over millions of years, and right now, those genes are just using us as a means to pass themselves on into the future.

And that model contains an implicit definition of happiness.

If we’re essentially animals, well, we know that animals aren’t really all that hard to figure out. They generally want a few basic things. They want to survive, first of all. They want food, drink, and shelter. They want mates, and they want offspring, and they want their offspring to survive. And as we move up the chain into some of the more complex ones, we find that they usually want a few extra pleasures – status, companionship, respect, and so on.

And that’s pretty much it.

According to this model of human nature, then, “happiness” is composed of creature comforts.

The definition of happiness this model implies, and is based on, is simply to get as much of all this as possible for as long as you can. Pack in as many creature comforts as possible, until your time’s up.

The majority of Maslow’s Hierarchy pretty much sums it up. 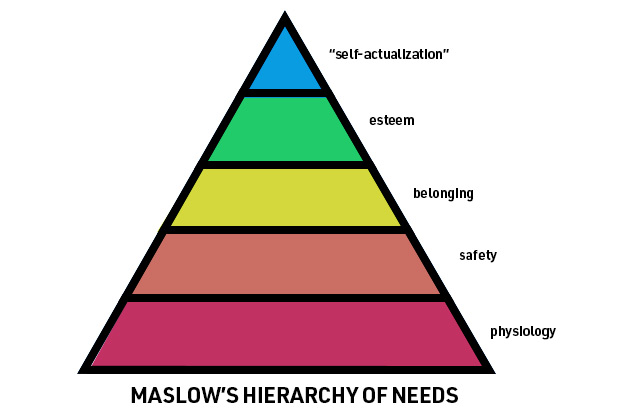 But that might not be telling us the whole story.

But does it give us the entire picture?

Many claim that there’s something more to human nature than us being merely animals.

But is that really the case? Is that true? Is it true in a verifiable, recognizable, practical way? And if that is the case, what, exactly, is that “something more”?

Most of his “hierarchy” is compose of, essentially, creature comforts. But then he added another category at the very top that he called “self-actualization.”

So our progress so far: one big section for “creature comforts,” and then another tiny section for “everything else.” 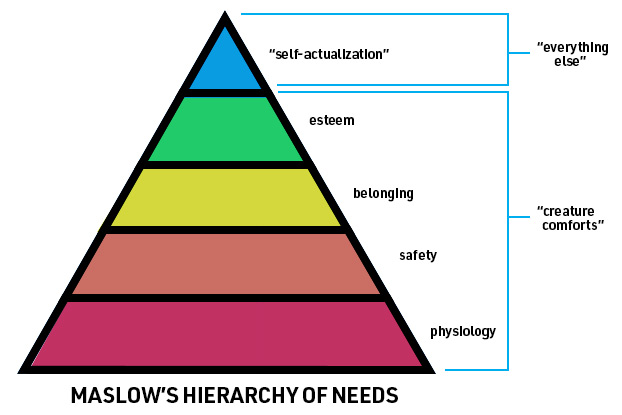 And of course, this “everything else” is what many folks would describe as – for lack of a better word – a spiritual component of human nature. Call it a “soul,” or “spirit,” a “Buddha-nature” or Buddhi (Sanskit) or “Atman,” an “Intellect” or Pneuma or Nous (Greek) or “conscience” or Rūḥ or ‘Aql (Arabic) or etc.

Whatever you might call it, lots of folks think that in some fundamental way, we aren’t merely animals. They claim that there’s something else in us. Something more.

And this complicates our search for happiness a bit.

Because if this is true, then it seems to follow that mere creature comforts – security, food, shelter, sex, clothing, various pleasures, even respect, even love, and so on – won’t be enough.

If this second model of human nature is correct – that we’re both animals and also “something else,” whatever that “something else” might be – then that means we might never find the kind of complete and total happiness that we hunger for, unless we take that other part into account.

And that’s a problem.

Because we’ll never be satisfied for long by mere creature comforts.

If this is true, then well, creature comforts are great. But they just aren’t enough.

And here’s where things get tricky.

Creature comforts satisfy us, sometimes. At least a little. But not completely, and not for long. 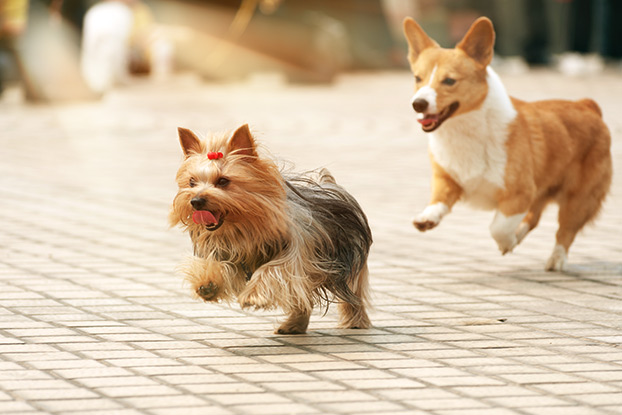 And this can throw us in an endless loop of searching for greater creature comforts.

And so on, ad infinitum. An existential loop.

This sets us up for a cycle of frustration, potential misery, and eventual despair.

It can turn us into cynics that see life as a sick joke, our situation as a road to nowhere, the human condition as an existential hamster wheel. Our pursuit of happiness seems doomed. All we can do, it seems, is to distract ourselves, amuse ourselves, and numb ourselves until it’s finally time to do the mortal coil shuffle and exit offstage for a long stay in the pine box condo.

But there’s a chance, of course, that we’re completely wrong about all that.

There’s a chance that we aren’t seeing our own situation properly.

The real problem, in fact, might be that we’ve just been searching for love in all the wrong places. That we’ve been trying to make bread from sandstone. Trying to make a meal out of mayonnaise.

Or more accurately, that we’ve been searching for happiness using a bad model of human nature. Or not “bad,” exactly. Just inaccurate. Or really, incomplete.

If we’re trying to navigate life using an incomplete, badly-drawn map of human nature, then we might easily find ourselves working the existential hamster wheel.

The solution, then, would mean upgrading our model of human nature.

This could mean investigating that “something else” that might be hidden somewhere in the depths of our nature, and really getting to the bottom of it.

Again, call that “something else” whatever you want: “self-actualization” or “spirit” or “soul” or “Buddha-nature” or “Atman” or “Intellect” or “conscience” or so on. But whatever word you use, this approach points us toward exploring whatever that is that claims to deliver a version of happiness beyond mere creature comforts. We can just call it a “spiritual” component of human nature, since no single word seems perfect.

And of course, for a lot of folks, this is a problem.

Because “spirituality,” for some folks, brings to mind various forms of the word “nonsense.”

For some folks these days, “spirituality” is a mishmash of pre-modern, half-baked, and discredited wishful thinking. For them, it brings to mind predatory gurus, painfully boring services, nonsensical jabber about things like chakras and energy fields, and Bible-thumping televangelists that a sane, rational, intelligent, clear-thinking and reasonable individual would do their best to steer clear of. They see it as an imagination cloud of fantasy, wishful thinking and make-believe, after all, and in the brutal day-to-day of the real world, down here in the dusty streets, there’s just no time or patience for that kind of nonsense.

That seems to be roughly what comes to mind for at least some folks when the word “spirituality” is mentioned today.

And to be fair: a lot of religious folks have been incredibly successful at discrediting themselves.

For plenty of reasons, it seems to be the case that a lot of folks have never been exposed to anything more than whatever has left such a bitter taste in their mouths. Their experience of religion or spirituality or anything remotely close to it has left them so burned or bored that the entire game seems better off just abandoned, in the same way that they might skip an afternoon just hanging out in a mental institution. Life is short, after all, and there are worse things than creature comforts.

But of course, that might not be the entire picture, either.

Sure, some of what presents itself as religion or spirituality really is nonsense, and would be best avoided by all of us.

But is there some kind of spirituality that isn’t nonsense?

If there’s Fool’s Gold, doesn’t this mean that somewhere out there, there’s real gold?

Is there some kind of approach to all this that actually makes sense? Some route that doesn’t require a long walk off an intellectual short pier? Something that isn’t just a stack of old warmed-over clichés or a bubble of imaginary fantasies that we want to be true? Something that any sane, rational, intelligent, clear-thinking and reasonable individuals could easily see value in, and make sense of? Is there an approach that strips away all nonsense and peels off any absurdities or irrationalities, and gets down to a kernel that isn’t offensive to the mind or heart of a sensible person?

Well, that, dear reader, is what your lovable and trusty LiveReal Agents are in hot pursuit of.

We seem to have made progress here. We've mapped out a whirlpool (or existential treadmill) that we should probably avoid, which is a good thing. And we've decided that having a having a map of reality, and tearing off one section because we decided that "beyond here be monsters" might leave us wandering through realms we don't completely understand.

But we’re still working to investigate, and pursue, and – yes – find and experience some kind of happiness beyond mere creature comforts, as well as an accurate and complete map of human nature. That prize seems worth the struggle. And based on what we’ve figured out so far, what we’re looking for seems to lie somewhere roughly in the direction we’ve outlined here.

So that’s the direction we’re planning to explore.

If you enjoyed this, consider becoming a member.

What Is Real "Happiness"?

Is There a Spiritual Component to Human Nature?

The Meaning of Life: 10 Popular Answers (That Don't Fully Work)