Kierkegaard on How To Become a Better Lover

The All-Important "How" Question 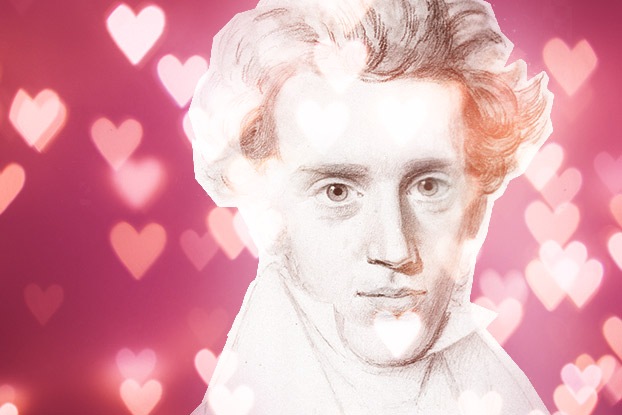 Everyone should “love each other.”

Right. We've heard about this.

It's been said for thousands of years now. Nobody really disagrees with it. From John Lennon to “Namaste”-sayers to compassion-junkies everywhere, pretty much everybody is on the same page that, well, at least in theory, loving each other (instead of hating) isn’t a terrible idea.

Let’s take this seriously as something we can and should really, actually try to do.

The hard part here isn’t in the concept. It’s in the execution.
But the “how” part of all this rarely gets much attention.

And maybe that’s part of the problem.

We often assume that love is something you either “fall in” to or willpower your way through. Which should explain why, despite everyone repeating this idea to each other for thousands of years, and nodding and agreeing and harumphing, well, we don’t really seem to quite be there just yet.

But maybe Kierkegaard can help us out here.

Here’s something he said that might give us a fresh approach to the problem:

That's an angle you don't hear much about these days.

Maybe unlocking the whole “love” thing isn’t a matter of just falling into it, or leaning on every other person in the world to become a saint, or trying to convince ourselves that it’s really endearing when folks leave their shopping carts sitting in the middle of parking spaces.

A big key, it seems, might be more a matter of transforming how we perceive others and ourselves.

What’s striking about this is how unnatural it is.

We don’t naturally do anything remotely close to this.

By default, we usually see ourselves subjectively and others objectively.

Which is to say, we normally see ourselves from the inside looking out, but we see others from the outside looking in. “I” am a subject “in here,” inside my own skin, seeing you from behind my own eyes, while you are “out there,” an object in my world, cutting me off in traffic.

We judge ourselves by our good intentions, and others by their observable behavior. When you cut me off in traffic, you’re a jerk. But when I cut you off in traffic, it’s because I’m really in a rush for a really good and important reason, really, and I don’t mean anything bad by it.

So our default mode usually translates into giving ourselves a pass, but putting others against the wall.

In a word, our default mode entails a certain bias.

And this particular type of bias has some deep and profound roots.

The “technique” Kierkegaard talks about here seems to be about reversing that. It's precision-engineered to act as an antidote to that bias.

It’s making the effort to see others from the inside out, and to see ourselves from the outside in.

And that’s no small task.

This might tie back to what Einstein was talking about.

As we mentioned here, Einstein mentioned a core illusion humanity suffers from: a “kind of optical delusion of…consciousness.”

If Big Al is on to something there, it seems to mean something along the lines of the condition Kierkegaard was supplying the antidote for: a core illusion or fundamental error that’s baked into the pudding of our own minds.

This core illusion might be our "default mode" mentioned above: that we naturally tend to see others objectively, but see ourselves subjectively.

It might be the case that neither mode - objective or subjective - is entirely correct on its own. It might be that there’s a split, a brokenness, something incomplete, some kind of basic error in the way we see the world that skews our perception of almost everything.

Kierkegaard’s challenge, then, is to work to overcome that.

One thing he doesn’t mention, though, is what might be a bit of risk involved here.

Which is only this: the idea here isn’t to make mere objects out of ourselves.

The idea isn’t to extinguish ourselves as subjects by trying to turn our own self into an object. That could take us in a direction of us caring as little about ourselves as we sometimes do others. And that’s the exact opposite direction we’re trying to move in.

The idea is to see other folks as subjects in the same way we see ourselves as subjects: from the inside out.

And the other edge of that sword means working to see ourselves more objectively.

In other words, to know ourselves.

As Gurdjieff said, many of us can love each other, as long as we've had our cup of coffee in the morning.

Any serious effort to become a better lover should bring us to a point of confrontation with our own limits. For example: someone who imagines himself to be a profoundly compassionate person berates and embarrasses a harried waiter who brings him the wrong bowl of soup.

This guy might rationalize himself all in a thousand different ways, all the while imagining that he's half saint, half Bodhisattva, half martyr. Meanwhile, everyone around him might see it a little more objectively: he's just throwing a tantrum because he got minestrone instead of clam chowder.

His high opinion of himself is supported entirely by an utter lack of self-awareness.

All to say this: sometimes becoming a better lover means seeing stuff that isn’t always flattering. Sometimes, I eventually find the jerk who left the shopping cart in the parking space, and he is me.

The whole "love" business at this level isn't for thumb-suckers.

It isn't always easy, or always flattering, or constantly pleasant. It isn't supposed to be.

This can all lead us to being easier on others and harder on ourselves. Which is the diametric opposite of the norm, and of what comes easy.

So, stepping up to Kierkegaard’s challenge here isn't easy.

But the payoff could be well worth it, for ourselves and for everyone around us.

Being a high-caliber lover isn’t for the faint of heart. Literally.

But it seems to point to something we can all practice, to some degree, if we want to. Which means we don't have to wait around for it, or hope to fall into it, or hunt it down like a dog after a fox. It's something we can work to bring forth from ourselves, if we're willing. It's something that can transform a rough moment before we've had our coffee into an opportunity. An opportunity to dig down to whatever's flowing inside us, and open it up so it flows just a little more.

No doubt, this seems to mean swimming against the stream of nature. It goes against the seemingly natural flow of myself-in-here and everyone-else-out-there.

(But then again, salmon swim upstream. And they’re part of nature. Maybe it’s a more matter of picking the parts of nature we want to flow with.)

At any rate, maybe Kierkegaard's tip is a step forward on the challenge to “love each other.”

Maybe it's philosophical technology, or a point of genuine progress on a perennial problem.

Maybe it's a piece of hard-won wisdom that we tend to discover, and forget about, and rediscover again until at some point we make it ours.

At the very least, it’s an idea we can experiment with.

And of course, maybe it could become more.

Maybe it could become an inner rebellion against the norm of the status quo: the prison break from "me-as-a-subject-in-here verses you-as-a-subject-out-there." It could become a strategic maneuver in the struggle to answer one of the oldest problems humanity continues to struggle with. A chess move of the heart, that opens hearts, and fills them up.

And maybe even gets some shopping carts back where they belong.

If you enjoyed this, consider joining LiveReal. Because loving is way better than not loving. In one humble opinion.

What is Real "Love"? (The Real Kind, Not the Phony)

The "Typical Cycle of Intimate Relationships

7 Practical Spiritual Experiments You Can Run To "See For Yourself"

Does Human Nature Have a Spiritual Component? 50 Pieces of Evidence