Some of the last few words of a famous philosopher 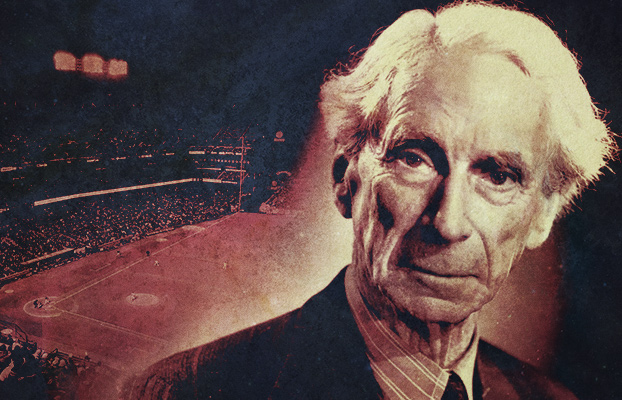 Modern mainstream academic philosophy has pretty much failed when it comes to meaning in life.

This is a generalization, of course, and as always, there are exceptions. And this isn’t throwing shade on the long and proud entirety of the Western philosophic tradition, dating back to Socrates and beyond, which has had many good things to say about the problem of meaning.

It’s more of a factual statement about how things have gone a bit sideways more recently. Meaning, in regards to a clear, definitive, widely-agreed-upon answer, contemporary mainstream academic philosophy has been – and continues to be – lost and wandering in the woods. Those folks say it themselves, as we’ll discuss below.

But then Bertrand Russell – king of mainstream academic philosophers for a while (described below as “the greatest” of the twentieth century) – toward the very end of his life, threw a curveball into all this.

And we thought that curveball was pretty interesting.

(Quick aside: Messerly deserves a lot of credit for this. After all, writing about issues that real human beings, who live outside of tiny cliques of academics, actually care about (and using clear, non-tortured language that’s actually designed to communicate instead of obscure) makes him a rare and highly endangered bird in philosophy departments these days. He probably took some heat from his peers for crossing the line and just trying to say anything intelligible  to us unwashed masses. And for that, we thank him. Thanks, Dr. John.)

In this book, he reviewed roughly a hundred or so thinkers who had something to say on the meaning of life, and wrote brief summaries of them. In this sense alone, it’s a handy, well-organized, useful book. Very good for finding leads to follow up on.

Toward the end of the book, Messerly offers his personal conclusions on the whole matter. And it seems fair to say that the answers he lands on – or lack thereof – echo a sizeable chunk of many other mainstream academic philosophers as well.

(We don’t agree with his conclusions, for what it’s worth. But we do still find them valuable and revealing.)

Here is what Messerly concluded, in his words.

“…despite our best efforts, we have not found all we were looking for. We cannot erase all our doubts; we cannot allay all our fears. In the end, we have no assurances and the abyss, as much as we wish otherwise, always accompanies us. Between eternal light and infinite darkness, we navigate on a razor’s edge. We are adrift, and we must save ourselves.”

(By the way, Messerly will probably be available for inspirational/motivational speeches, for the right price. One suggested power seminar title: “Adrift, and Accompanied by the Abyss: Navigating Between Eternal Light and Infinite Darkness.” Watch out, Tony Robbins.)

So at least by this measure, the quest of the modern mainstream academic approach to find “the meaning of life” has, so far, been a failure.

This answer isn’t really an astounding surprise. After all, if we really are living through the age of The Death of God right now, then this is all part of why nihilism is so popular these days, and why happiness, morality, meaning, psychology and so many other things often seem to be in such a mess.

But here, things get interesting.

In the last page of his book (335), Messerly quotes Bertrand Russell, whom describes as “the greatest philosopher of the twentieth century.”

Russell, as you probably know, was a very sharp, highly intelligent, rigorous thinker. He co-wrote Principia Mathematica with Alfred North Whitehead, an effort to prove that mathematics is a development of logic (currently the most famous work ever written on the foundations of mathematics) as well as A History of Western Philosophy (widely seen as a definitive classic) – as well as Why I Am Not a Christian, Religion and Science, and others.

He also won the Nobel Prize, got his face on a stamp, and etc. etc. Not exactly a “the dog ate my homework” kind of guy.

But when Russell was 95 years old, he wrote an untitled, one-page essay.

As Messerly describes, that essay went unpublished for more than twenty years after Russell’s death in 1970.

“The time has come to review my life as a whole, and to ask whether it has served any useful purpose or has been wholly concerned in futility. Unfortunately, no answer is possible for anyone who does not know the future.”

So, let’s lock this in: a man some folks have described as the greatest philosopher of the twentieth century, and the guy who literally wrote the definitive book on Western philosophy, said essentially that “no answer is possible” when it came to meaning in life.

(And as Messerly attests, this basic answer hasn’t really changed since 1967.)

He says several more things: essentially, that we can do better, and we should.

But here is his last sentence.

As Messerly describes, “The final sentences ever written from the pen of one of Western civilizations great writers and philosophers…” were these:

“There is an artist imprisoned in each one of us. Let him loose to spread joy everywhere.”

That’s one we can call an “intellectual curveball.”

Again, this guy was no hippie, no Oprah featured guest, no self-help infomercial salesman peddling weekend seminars titled “Freeing the Inner Artist with Bertrand Russell.” He was one of the history’s toughest-minded skeptics, recipient of the Order of Merit, one of the founders of analytic philosophy.

And in what was probably one of the most sober and lucid moments, reviewing nearly the entirety of his life, he said that.

“There is an artist imprisoned in each one of us. Let him loose to spread joy everywhere.”

What are we to make of this?

In the moment he wrote that, it seems safe to say that Russell wasn’t asserting or defending an elaborate philosophical premise. He wasn’t gaming for tenure, trying to score a juicy grant, or promoting a bestseller. At that moment, we can reasonably guess, something just occurred to him – a moment of inspiration, perhaps - and he apparently felt that it was important enough to write down.

We could call it an “intuition.” Maybe something just popped into his mind, from out of the blue, with no further evidence or reasoning accompanying it – and he just caught hold of it, held it down, and stayed with it until he was able to express it in words.

So again, what should we make of this?

Let’s explore this a little deeper.

“There is an artist imprisoned in each one of us.”

“…something in each one of us” could be rephrased slightly to mean “something within human nature.”

By “artist,” we could reasonably guess that he means something that is primarily creative, something with a fresh angle on things, with ingenuity, something with a different, more interesting, perhaps higher or superior perspective.

And it is “imprisoned.”

Shackled and chained by forces inside ourselves? What forces? Whatever it’s imprisoned by, he seems to be saying that there’s something keeping it in some kind of dormant state. It’s not fully realized yet; it’s inactive, sleeping. Maybe it’s in some kind of trance, like an inner Sleeping Beauty. It’s something perhaps yet fully matured, not fully awakened, not fully realized or made real. It’s unconscious.

Maybe we could rephrase this just a bit:

Maybe he was on to something.

Does Human Nature Have a Spiritual Component? 50 Pieces of Evidence

"The Meaning of Life": 10 Popular Answers (That Don't Completely Work)