How Game Theory Can Help You Be Smart About Relationships

The game of love? Play it well.

"Most of us are pawns in a game of love we don't understand."
- Leo Buscaglia Game Theory can help you be smart about relationships.

OK, so…yes. The idea of this might seem a little strange. At first.

After all, isn’t love all about passion?

Isn’t it supposed to be all free-flowing and gushing affection, beauty and romance oozing all over the place, wild nights full of poetry and music and reciting sonnets to each other?

Wouldn’t “game theory” in these realms look like a mathematician graphing out a ballet dance? A NASA engineer teaching salsa?

But we aren’t trying to capture the essence of love here.

We’re trying to navigate a jungle.

Yes, relationships are about fluttering hearts and opera and all that.

But as most of us soon learn sooner or later (and sometimes rather harshly): that’s not all it is.

Relationships also take place here in the real world, where we have limited choices, finite resources, and only so much time, energy, and emotional wounds to go around. In this realm, there are predators and prey, triumphs and trauma, and navigating the treacherous terrain of relationships in the modern world can be like working your way through a minefield.

A minefield with buried treasure, that is.

Times have changed. The norms, rules and structures that used to act as guard rails for relationships (for better or worse) are rapidly dissolving. (Anyone remember “going steady”?)

This means a lot of folks are now completely on their own in figuring all this out. (And by "this," we mean navigating the minefield. In a jungle.)

But Game Theory can be a handy tool that can help out here.

(And yes, this does means viewing certain aspects of all this as a “game.” But this doesn't mean it can't be deadly serious. If it’s effective enough to help leaders of nations figure out how to avoid nuclear war (which it is used for, among other things), it might be useful for the rest of us, too.)

And the stakes are high.

That’s not totally fair, but it’s a starting point.

The above isn’t a formula (we aren’t into the actual theory yet) – more like general guidelines to start the ball rolling. There are smart moves in navigating relationships. And there are dumb ones. (We’ve all made some of those.) There are no guarantees (“all is fair in love and war”), but we can work to improve our odds.

So, can Game Theory really provide a framework that might help us navigate this jungle?

Let’s start with the classic: The Prisoner’s Dilemma

Imagine you and your partner just got caught stealing jewels, red-handed, by the police.

Both you and your partner-in-crime are now being interrogated, each in different rooms.

The detective makes you an offer.

1) If you confess to the crime and spill the beans on your partner, you’ll go home, free as a bird. (Your partner will go to prison for 10 years.)

3) If you say nothing to the police, but your partner spills the beans on you, then you’ll get a 10 year stretch.

4) If neither of you spills the beans the beans on the other, then you’ll each get two years in lockup.

We can map out the possible scenarios like this: 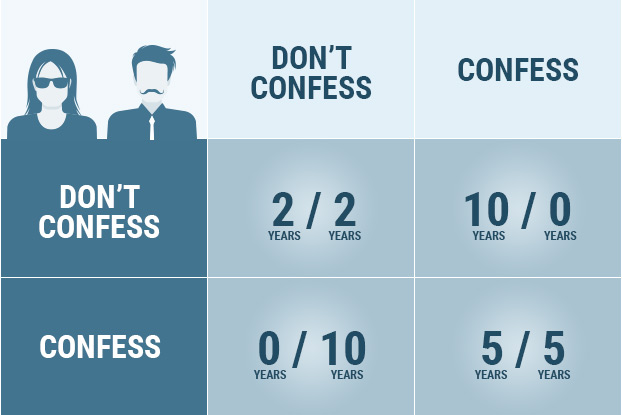 So, what does this have to do with relationships?

Even if you aren’t a jewel thief, this can still be a useful little puzzle.

Let’s imagine that a guy and a girl are out on a first date. The girl puts him to the test by laying out the above scenario to him, and asks him what he would do if he was in that situation.

For example, he might say: “Easy. I’d rat my partner out. No question.”

He just revealed a lot about himself.

Or he might say: “Well, it depends. Who is my partner? Do I know or trust him or her? What’s our relationship?”

Also revealing. He’s digging deeper. Not impulsive. Also, just by asking the question, it reveals that he might consider spilling beans on some folks, but not others. Also good to know.

So, our little inquiry into game theory is already yielding some fruit. And we’ve barely started.

From here, our cute little couple could run through a few different scenarios.

They could imagine, for example, the two criminals were childhood friends and trusted each other.

“Then,” the guy might say, “I’d definitely rat my partner out. Because then I’d know my friend wouldn’t rat me out, and he wouldn’t be expecting me to do it to him. So I’d get off, free as a bird! Ha! I win!”

Again, good to know. (And a good time for her to end the date.)

So here – without even getting into game theory itself – is one possible benefit of it: using it as a way to get folks to reveal things about themselves that are probably good to know.

But we’ve barely scratched the surface.

Now let’s dig a little deeper into how we can apply this.

Let’s imagine that the partners-in-crime are married.

If the two jewel thieves trust and love each other, what will happen?

Neither will spill the beans on the other. They’ll each get two years in the pokey.

According to game theory (meaning, the math checks out on this), this is the best possible outcome when considering the couple as a whole, defined as total time served (4 years in Club Fed.)

Let’s compare this to an “unhappy marriage” where one partner turns on the other. That would result in 10 years in the pokey.

Or, worst-case scenario (or what science might call “a marriage with some serious problems”) where both partners would turn on each other. 10 years hard time.

So, notice what we just did there?

We just mathematically quantified the quality of a relationship.

Not exactly what we were aiming for (we aren’t finished yet) but it’s a nice little bonus.

But it gets juicier as we look more into what all this means.

Going off script from game theory here (but we’ll come back.)

The core of the matter here is 1) trust, and 2) what one person is willing to do for another.

In the best-case-scenario, both partners trust each other. And they genuinely care about each other.

And not only that, they’re willing to sacrifice things for the other person’s happiness. (In the dilemma, each partner is willing to expose themselves to the risk of spending either 2, 5, or 10 years in the slammer.)

So, that situation – described above – is the ideal, happily-ever-after, jewel-thieves-walking-off-into-the-sunset scenario.

In the other scenarios, the couple turns on each other. Either one turns on the other, or they both do. This means there’s either a breakdown of 1) trust and affection, or 2) what one partner is willing to do for the other.

Which brings us to another benefit of approaching relationships using game theory: it can provide a way to describe the kind of relationship you want and don’t want.

Granted, it's not The Notebook Part 2: Love Strikes Back. Fair enough.

But here’s the kicker.

We all get faced with “Prisoner’s Dilemma” kinds of choices, all the time.

We don’t have to be jewel thieves.

Let’s imagine a scenario where a married couple has a baby that wakes up in the middle of the night.

(Let’s make all other variables equal: we’ll say both parents work and have the same hours, both are tired and want sleep, neither are night-owls, etc.)

Now let’s say you’re one of the parents, and you hear the baby crying. And you can’t tell if your partner is asleep or awake.

What do you do?

Option A: you get up.

Option B: you wait silently in the dark and hope your partner takes care of it.

Let’s say you choose Option A. This means you’re willing to make a sacrifice (of sleep) for the sake of a cute little crying munchkin. We’ll call you a “Giver” in this situation.

What does your partner do?

This means they’re also willing to make the same sacrifice. They’re a “Giver” too.

So now we have two “Givers” in this scenario.

Both wake up and try to help. If only one person is needed, they figure out some kind of “Nash Equilibrium” (yes, from the movie "A Beautiful Mind") – an optimum solution such as taking turns.

Which means this: having two “Givers” results in what game theory would describe as the “best possible outcome.” (Like serving 4 years downtown in the jewel thief scenario.)

But now let’s imagine that somebody chooses Option B.

Now, at least one partner waits silently in the dark, hoping the other partner will take care of it.

We’ll call this partner a “Taker.”

Now you can guess what happens from here.

If there’s a Giver and a Taker, the Giver will be exhausted while the Taker appears to get off, free as a bird (at least in the short-term.) Or if there are two Takers, well…not pretty.

Each of these “Option B” scenarios (where someone is a “Taker”) winds up with the sleep-deprivation equivalent of a 10-year stretch in some form or another. So, 10 years up the river instead of 4. 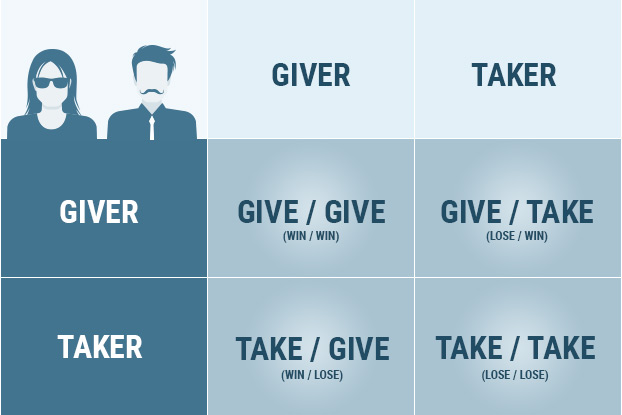 Of course, life is usually messier than models like these can capture.

One parent being a heavier sleeper, for example, might throw everything off (because they’re appearing to be a “Taker” when really, they’re just unconscious.)

So we shouldn’t go overboard in applying this too strictly to the situation on the ground.

That said, we’ve made some progress here.

So, what’s the moral of the story?

First, there’s potentially a mathematical way to demonstrate that couples who trust each other and act selflessly – for the benefit of the other player – wind up making things better off for everyone involved.

Second, thousands of dilemmas (prisoner or otherwise) come up over the course of a relationship that force choices like these. Becoming familiar with them, and the consequences that ensure because of them, might help us make smarter choices in them.

Third, we've possibly discovered a system of thought – game theory – that might just help us navigate the treacherous waters of relationships in a way that’s better than trusting our "heart" or hormones. In some ways, it's basically a methodology of "thinking things through." Which can be useful in quite a few areas of life.

Because we’ve barely scratched the surface of game theory itself. It’s a powerful tool, and there’s a lot more interesting stuff we could explore along these lines. But we’ll say we’ve played enough for now.

And trust, and be selfless sometimes, and maybe aim for relationships with a partner that will adopt the same strategy.

If you enjoyed this, consider joining LiveReal for way more.

And if you liked this article, check out...

The Best Science Has To Offer On Relationships

The Typical Cycle of Intimate Relationships