MEANINGLESSNESS IN LIFE AS A MATTER OF PERSPECTIVE (OR LACK THEREOF)

It can seem that way sometimes.

After all, what’s the point?

It isn't always clear that there is a point. 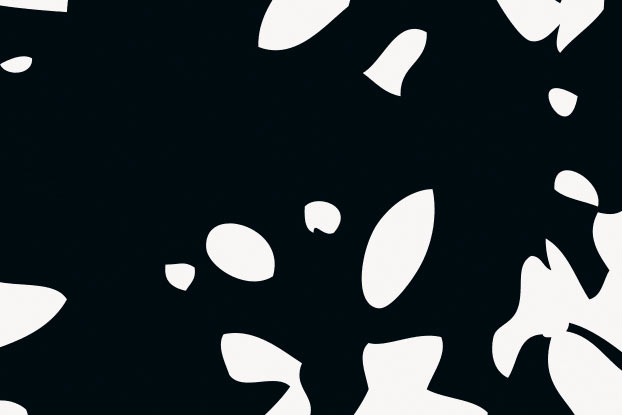 It doesn't seem to be anything that makes sense.

When we try to make sense of things (what are those shapes, after all?) – we sometimes can’t find any answer that seems at all coherent.

Evidence that leads to the conclusion that “life is meaningless” isn’t hard to find.

Some try to dismiss the problem with platitudes. “Just enjoy it!” “Live life to the fullest!” “Make the most of every moment!” And so on.

The idea seems to be to just find any old game in life, and play it. But the choice of game matters. Trying to actually put those "just enjoy it!" tips into practice can mean scrambling around to gather as many pleasures as possible, even if those pleasures are mild, temporary, and ultimately unfulfilling. Given a long enough time span, the search for happiness via this route tends to fail.

We can even experience the best life seems to offer, and still ask, “Is that it? Is that what it’s all about? Is that all there is?”

It can all seem like sipping cocktails on the deck of the Titanic, straining anxiously to dance and be merry in the looming shadow of an iceberg.

But what if this isn’t the case at all?

Is there an entirely different approach?

Is the only answer really to just “Sip that cocktail faster!” and “Dance harder!” because that iceberg keeps getting closer?

Maybe not. Maybe the underlying concepts that give rise to the entire problem outlined above are based on mistaken ideas.

Maybe the entire way of seeing and understanding the world, as described above, is based on a misperception – a mistaken way of seeing things based on inaccurate answers to The Big Questions of life, especially the question of “the meaning of life.”

Maybe the situation is like being terrified of a snake.

Hours, days, even years go by, and someone can live in fear of a scary snake lurking in the corner that always seems as if it’s about to strike.

But one day, that person discovers that there’s actually no snake at all.

It was just a rope.

It was a common, ordinary, boring rope that just looked like a snake from a certain angle.

That would mean that all that time spent in fear and worry was filled with unnecessary suffering.

Could the same dynamic happen when we see life as meaningless?

Maybe seeing life as meaningless is a matter of perspective.

Let’s look at this image again.

What does the above image “mean”?

It doesn’t seem to “mean” anything.

To all appearances, it’s just a few random shapes.

Of course, if we wanted to, we could “make stuff up.”

A slick, smooth-talking art museum curator, for example, could pontificate at length on the image above.

That slick pontificator could expound at length on why the image above is really a piece of art that’s super-deep and worth hundreds of thousands of dollars or more. (Rare, Limited Edition prints of the above are for sale, by the way.) Anyone who disagrees just “doesn’t get it.” That person just probably isn’t sophisticated enough. And etc.

The rap could go on describing how the piece really has deep meaning because the lines really symbolize the ongoing struggles of X against Y, or the compelling narrative of blah that illustrate the eternal principles of blah blah and etc. It’s possible to spin entire metanarratives based on a few random shapes, Rorschach-like (and some art and literary circles today tend to do that.) This can translate into highly lucrative sales pitches that are based less on actual art than psychological dynamics (such as peer pressure, appeals to ego, subtle tactics to employ shame, humiliation, and other means of manipulation, etc.)

(Quick aside: The above is also a demonstration of the worldview of existentialism in action. Existentialism (as often defined) assumes that “the world is inherently meaningless, but our task is to create meaning, or impose meaning on the world.” Some assume that existentialism tells the entire story, which can then easily become a license to just make stuff up, or endlessly “spin.”)

But here, it’s OK to be honest and unpretentious.

To all appearances, that image looks like a bunch of random squiggles.

But now let’s back up a little.

Let’s widen our view, so we’re able to take in more of the same image. 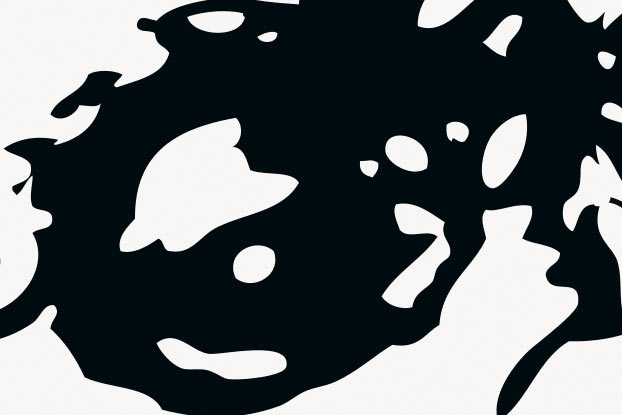 It still seems meaningless, but it’s a little more interesting.

And let’s back up a little more.

We can see more of the image, and it looks like this. 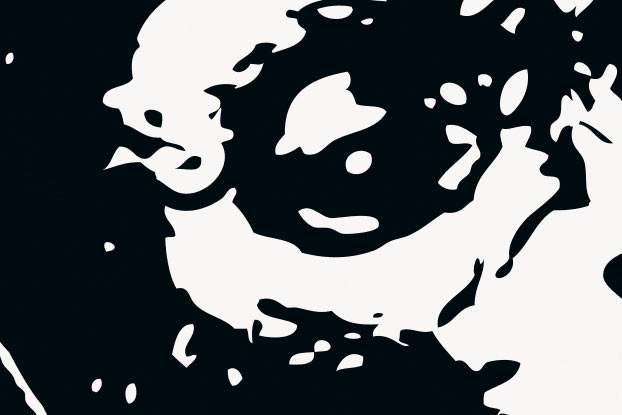 Now we can start to get some ideas.

Something seems to be taking shape.

We can think, and question, and speculate.

Let’s back up a little more, and take in more of the image. 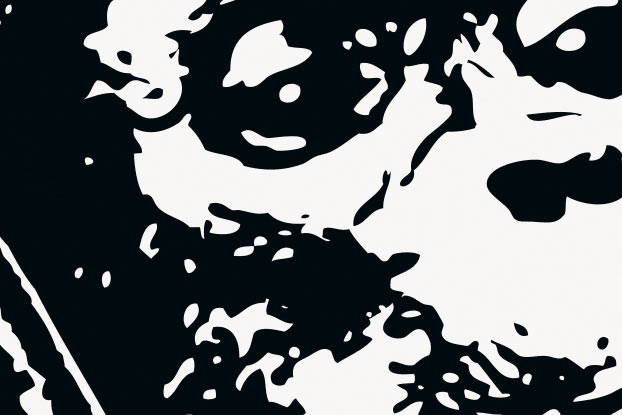 What’s the “truth” about it? Who knows?

Let’s widen our perspective and try to look at even more of the image. 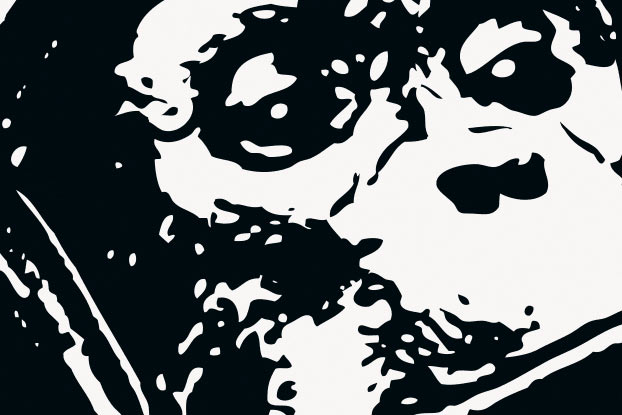 OK, now this is definitely starting to look “meaningful.”

Is that what I think it is?

People can divide up into different groups that hold different opinions.

Those groups can argue, fight, and even go to war with each other to determine who is right.

“Nothing is so firmly believed
as that which we least know.”
- Michel de Montaigne

"And most controversies have arisen from this,
that men do not rightly explain their own mind,
or interpret the mind of the other man badly.
For really, when they contradict one another most vehemently,
they either have the same thoughts,
or they are thinking of different things,
so that what they think are errors and absurdities in the other are not.”
- Baruch Spinoza

“…the World is both a Paradise
and a Prison to different persons.”
- Thomas Traherne

In the meantime, we can keep going. 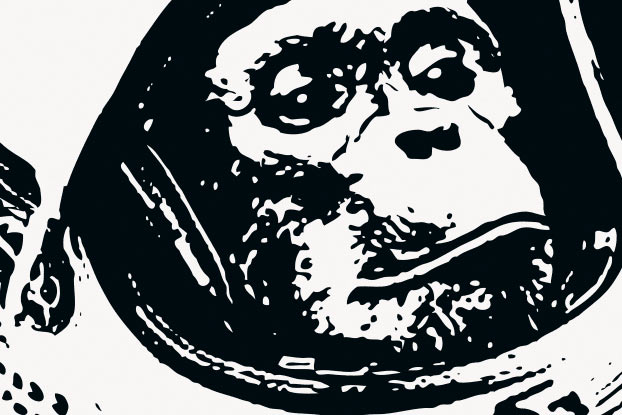 And finally, we can see the full picture in all its glory:

Life might genuinely seem to be meaningless as we see it right now.

But maybe that’s because we’re too close.

Maybe we’re only seeing what’s immediately in front of our faces.

Maybe what we’re seeing is valid, but just not the whole picture.

Maybe we can work to widen our view, and question what we know and see, and strive relentlessly to see more.

If we do that, maybe the illusion of meaninglessness will naturally just fall away.

Maybe “meaning” will become clear, just like it did the instant those random shapes “transformed” into a familiar and recognizable shape.

After all, in the instant, those shapes become something meaningful, it wasn’t “the world” that transformed. Our perception of it transformed. Or, more strictly speaking, our interpretation of what we saw transformed.

And that can make quite a difference.

In this way, maybe “the meaning of life” is something we can actually get a pretty decent handle on, if we can get a good perspective.

Maybe we can figure out that it's a space monkey.

What is "The Meaning of Life"? Our Quest for The Answer

"The Origins of Modern Meaninglessness

The Philosophical Roots of Our Cultural Frictions

"An Existential Crisis": What it is and What to do About it